I have been on many camping trips in my 10 plus years of stay in the USA. First 4/5 years we did strict tent campings, then moved to cabins/yurts, and later started on remote campings (no electricity, no gas, no water, just a wooden or stone made house). I enjoyed every bit of it, being an avid nature lover. My very first camping trip was Uluru since we migrated to Australia. The Outback adventure tour was something out of this world, though. This was a trip that even the trip organizing company (name withheld) didn’t quite know about. This blog is not about the Uluru rock (a.k.a Ayers rock) but the time spent there. One can read about all the facts of Uluru on the internet if interested.

The day came. The plan was to fly from Melbourne to Alice Spring. Stay that evening and start bright and early morning (5am) on a 6hrs trip into the outback. There were 3-4 pick-up locations and our hotel was on the second pick-up point. We three (me, my wife and our son) and other two –  elderly but young couple from Melbourne- boarded with us. It was a mini-bus, a bit set back, as I was hoping for some sort of a rugged 4×4. However, since the group had 15 members, they had to arrange for a mini-bus. The driver, a happy go lucky guy, helped us put our luggage in the caravan attached at the back of the bus which also housed all kitchen stuff – utensils, food etc. Sleepy, we settled in, as the bus made few more pick-up stops and when all were in, we started the arduous journey into the most awaited arid landscape, which I have only heard and read about.  It was something we three have never experienced, not even the Arizona, Nevada landscape come closer to this. We were aghast by the flat land, red sand, sun beaming strong – even in early morning and no human being visible anywhere. It was September of 2015. We choose this month as it is still winter and a better month to be in Uluru.

On the way, we stopped to collect woods for our evening itinerary. This trip being completely in the outback, there were makeup tents and cooking areas and common toilets/bathrooms in some areas. New day, new site, a new camp was the theme of this trip. NO permanent establishments on any sites. We later found out that the cooking was to be strictly on coals as we were bare with amenities on this trip, leaving an absolute nomads life. Hence the wood collection. All of the group members soon embarked upon wood hunting and soon there was a huge pile of woods, good enough for that night and early morning. This was then a routine every single day.

We were driving through the rugged terrain of Kata Tjuta National Park with the sun blazing up in the sky and air-condition in full swing inside. The temperature was soaring as the day progressed. We were taking it all in what the landscape has to offer. We did stop for some refreshment at one of the locals. Our driver and all of us helped cook breakfast at the facility. A different experience altogether.

Pancakes – from scratch – in the making. There was an area with a shelter provided with a portable gas and a grill. Any bacterias that would be lurking in this facility would have been dead already due to the heat :-). We lived with this assumption for the entire 5-day trip..survival of the fittest?

The afternoon was devoted to enjoying the sites of Uluru, including a visit to the cultural centre to learn about the Tjukurpa (Aboriginal law/religion), a full base walk (10 km loop, 3.5 hours). There was an option to climb the rock but we decided to not do it in order to pay respect to the culture, so we base walk instead. Uluru is a sacred site and Anangu, the indigenous custodians, respectfully ask visitors not to climb it. We all were wondering how the rock could be climbed as we didn’t see a way to do so. The rock is completely smooth with no crevices or outgrowth to hold on to. However, on one side we saw a few metal bars with a rope running along to hold while climbing. But we didn’t see anyone doing so. Glad that people respect the belief of the custodians.

It was then time to view the magnificent sunset on Uluru, with a champagne by the side.

There were hundreds of tourist buses and thousands of tourist flocking to see the sunset. The shades on the rock vary as the sun sets which is a visual treat. It was time to leave the site as we had another long day the next before we cook our dinner and settle in our remote campsite for the first night. As soon as we were back at the campsite, we all begin doing chores. Some of us started helping in the kitchen, cutting veggies, making the dough, preparing stuff we haven’t seen, few of us brought down the twigs and wood from the top of the van, made a big pile and lit it. The primary objective was not to generate some heat but to make coals. Our dinner was going to be cooked on it soon.

If my memory serves right, we had a chicken dish, a beef stuff, a vegetarian dish for few and a nice local damper (Damper is a traditional Australian soda bread, historically prepared by swagmen, drovers, stockmen and other travelers. It consists of a wheat flour-based bread, traditionally baked in the coals of a campfire or in a camp oven: Source Wikipedia). This was an instant HIT. Never had tested such a thing until that evening.

After having a nice warm dinner and a clean-up, we all were given an option to either sleep in the tents (temporary canvas tents already installed on the grounds, enough for all of us) provided or sleep outside in the swags. 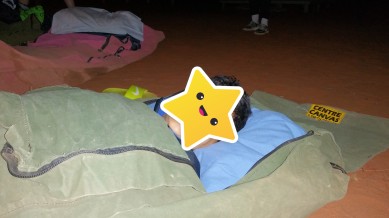 The idea of sleeping outside under the open sky was appealing and at the same time was scary as we didn’t know if any night crawlers would want to snug with us. But the enthusiasm overpowered over scariness and ALL of us decided to sleep on the ground. Our bags were sleeping in the tents…!!. It was a unique experience. Sometime in the midnight around 2am, the temperature dropped and we all begin shivering. Good that the fire was burning to keep the area warm enough. We all have positioned our swags around the fire. We were all tired and soon were snoring. We had an early start the next day to view the sunrise over Uluru. Good Night folks…..Sleep tight, don’t let the crawlers bite…!!