The next day was an early start, woke up at 4am, I suppose. Tidy up the swags and ourselves and moved out before the sunrise. Bundled up, we drove to a nearby lookout and waited for the sun to show up over Uluru and Kata Tjuta (many heads). I should be honest here to say that though it was told to us that we will experience an amazing view of the rock bathing in the morning early lights, we had a bit of a setback either due to the angle of viewing or the location or the fog cover. Nevertheless, we got to see the sunrise. As soon as that happened, we drove back to our campsite to have a quick breakfast and morning rituals (!!). Once ready, we were off to Kata Tjuta for a 7.4km hike through the magnificent “Valley of the Winds”. The idea behind moving quickly in early mornings is to avoid getting scorched. Soon the sun starts beaming up in the sky the temperature rises and by noon it becomes unbearable. It is hence advisable to complete high effort activities by or before noon.

Kata Tjuta (a.k.a. The Olgas) is a massive pole of 36 weathered domes (steep sandstone monoliths), estimated to be around 500 million years old. It is graded level-4 (Difficult) walk and not for the light-hearted. It has steep ascents, and descents and few rocky patches. This walk retains a sense of wilderness and is by far the best walk. Most of our group members were young, few in the mid-40s and a couple in their early 70s. We had a cultural celebration amongst us. There was a group of 3 from the UK, a group of 4 from Holland, an Indian-English young lady, me and my family and the senior couple from Melbourne, Australia, one young lady from Sydney, Australia and another woman from Germany, visiting her son studying in Australia. Frank (name changed), who was almost 70+ was seen as someone who might get dropped out of the climb due to his recent knee surgery. To everyone’s amazement and his own willpower he never backed out of any hiking trips in those 5 days and was always the enthusiast bloke in the group. 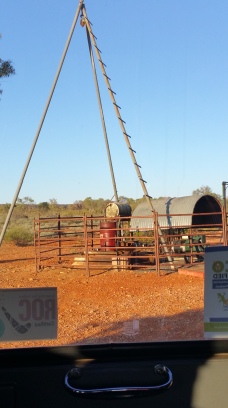 We completed the hike and gathered at a shed to prepare our lunch. Required stuff was taken out from the trailer and every one of us helped to prepare a quick lunch. Mostly it was a sandwich, both veg, and non-veg. After a leisurely lunch under the shade, we head to Curtin Springs Cattle Station. Originally known as Mount Conner Station in the 1930s, became known as Curtin Spring in 1940 after John Curtin. We got a close look at the typical working cattle station. Water for the station and livestock is supplied by pumping it from underground with diesel or solar pumps and windmills. We then traveled to Kings Creek Station for our second nights remote outback campsite. This is where the feeling of ‘way outback’really start to take hold.

We were all tired and sore and were in need of a good warm bath. Now the fun begins. In the outback where there are no commercial establishments, there were no bathrooms and toilets either.

Shower room in the outback

Then we were introduced to our luxurious shower room. It was a bit farther down from our tents, but a bit hidden. As shown in the picture, there are no doors, just a thin plastic sheet as a wind cover – maybe..!!. Though you may see a mixer, the cold water doesn’t work. It had just one pipe coming from the backside and into the shower hut. It also had a solar powered light inside. But just opening the faucet won’t get you a warm water. There’s another thing to be done. See in the next picture a guy (our tour co-expert) is leaning down and doing something. The upright copper/iron thingy is nothing but a boiler He is starting a heat for the water in the boiler to boil. Once the fire starts and keeps burning, the faucet delivers warm, rather hot water. This was so cool. Having a HOT water bath in the middle of a desert. The key was someone had to watch over the fire and keep it live everytime someone was in the shower. For example, when my son was in the shower, I had to keep watch, add woods to the fire and keep it burning. The shower time was rationed to 5 mins per person due to an acute water shortage. 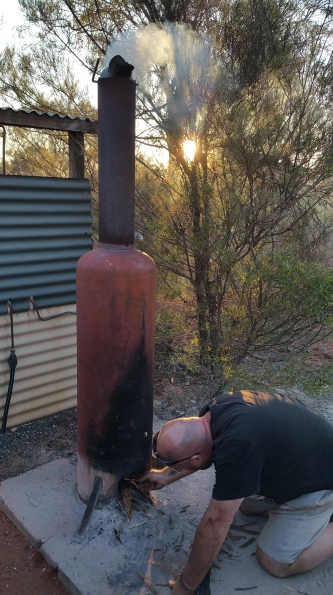 Once we took turns and everyone had their showers out next assignment was cooking. As usual, on the first night of camping, we gathered to do our chores. Few of us gathered woods (some were already gathered on our way to the campsite), burned them to form coals. Others helped in cutting veggies. The damper was on the menu too. 🙂

While the dinner was cooking we all sat around the fire, shared stories, our experiences so far, cracked jokes (the group really had to restrict themselves in cracking adult jokes due to my son around who wasn’t even a teenager that time), passed comments on others and had so much fun. Our guide and his companion were so knowledgeable about the area and the landscape, in general, kept sharing secrets about staying and surviving in such a harsh environment, the various plants and shrubs and their existence, the grubs (witchetty edible grubs, worms, called as Maku in native language) that are found beneath a certain shrub and much more. That day on the way our guide asked us if we would like to find out the grub. An adventure of its own. Not knowing what we are finding out we all said YESSS. He spent some time in finding out the exact shrub. Once located we had to dig the area to get to its roots. But none of us had any sharp object to dig through the hard ground. Few of us searched for a strong wood which has a pointed edge, some just tried their fingers. Later one of us took a stainless steel plate from the kitchen utensils. After spending a long time we barely could go an inch or two but never got near the root. As an environmental factor and the law, we were not supposed to uproot the shrub or damage it and hence were using all the methods to go under. We soon gave up as it was already HOT. Our guide had his laugh at how he made us work..!!.

After another campfire dinner, it was time to kick back and be mesmerized by the millions of stars on the display above. Like the first night, we all once again opted for sleeping outside in the swag. We were looking forward to it all day. It was something out of the world to see the sky full of stars on a dark night with no artificial light to diffuse this phenomenon. We all slept in the cold night, thinking of the next day adventure.